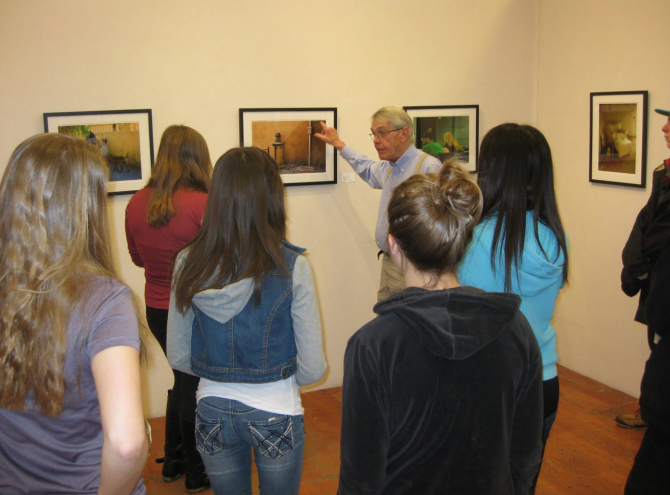 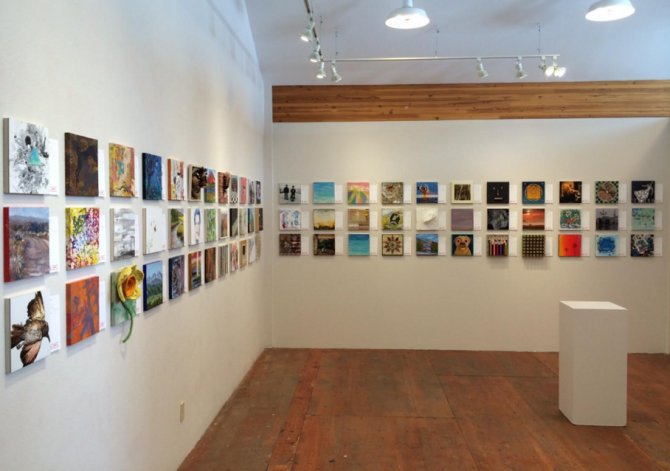 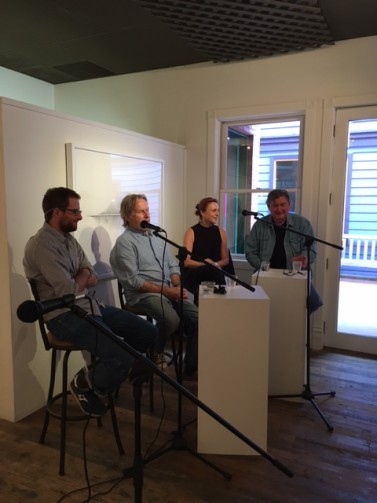 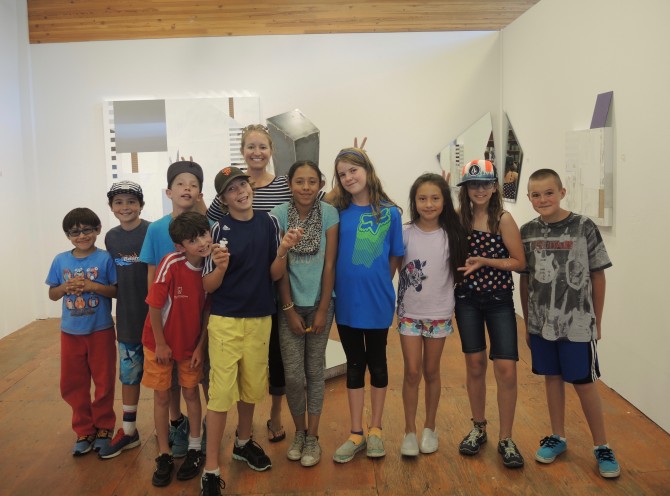 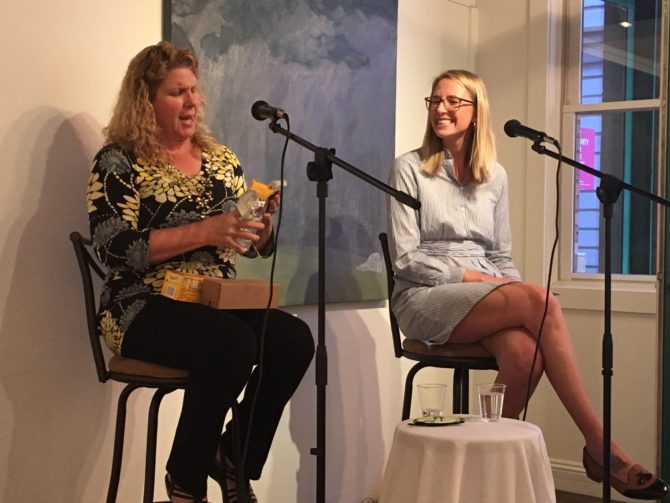 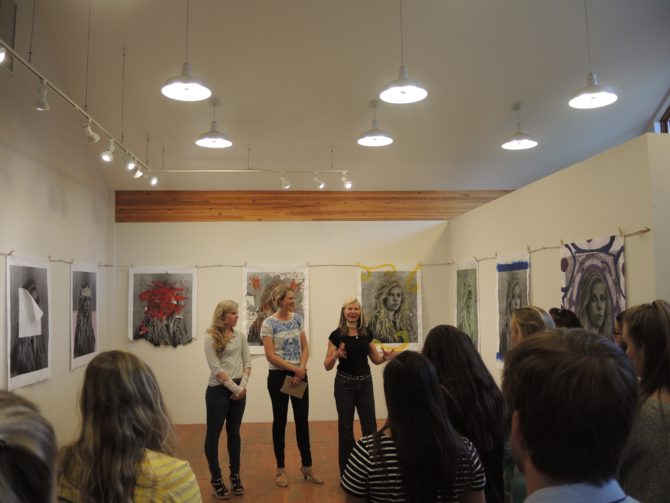 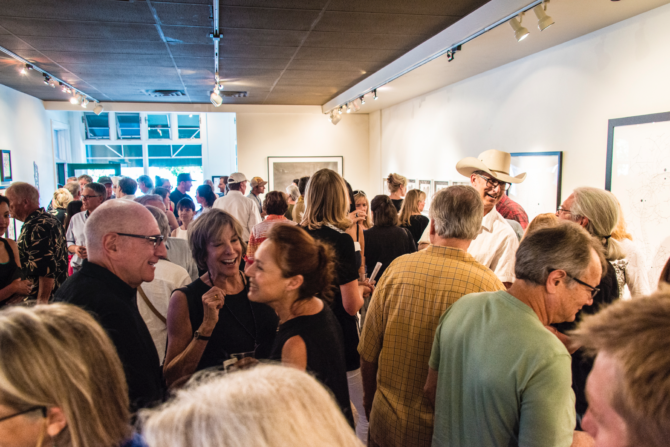 The Charles J. Wyly Gallery at the Art Base is happy to present printer and graphic designer Rick Griffith in an upcoming exhibition, BTW / Collages, Assemblages and Prints.

BTW / Collages, Assemblages and Prints employs collage cut outs from magazines and graphic interventions in the style of Constructivism. The Constructivist Movement’s graphical ideas centered on tectonics, texture and construction.

El Lissitzky employs the Constructivist ideals in Post World War I Russia with a political poster featuring red and white structural cut outs. In Beat the Whites with the Red Wedge from 1919, El Lissitsky elicits his support for the Bolsheviks (red) against the whites (Kerenski).  More importantly Lissitzky, a trained architect, breaks away from traditional art and designs formality and engages the community in a new set of ideas and graphic design.

Similarly, like the Bauhaus school that follows Lissitzky ideas, Rick explores the devices and notions of Constructivism through visual storytelling.

The composition of Rick’s diagrammatic collages, sourced from a garage sale collection of 1970’s Ebony magazines, speak to the rise of the—so called—African American middle-class. The diagrams and images form the basis of a conversation about privilege, about class and equality and being middle-class; with humor and parody. The contemporary source material, combined with drawing and cut paper, resembles the photomontages of Man Ray.  The trace lines found in Rick’s compositions harken to the architectural influences of Lissitksy and Bauhaus teacher Herbert Bayer.

Harry TEAGUE Architects is a proud supporter of The Art Base and enthusiastically sponsors this exhibition.

The Art Base Annex is excited to present an upcoming exhibition, Conflux showcasing nationally exhibited artists Stanley Bell and KAMP Collective artists—Andy Storey and Jeff Stevens. Opening reception is Friday, November 11, from 5:00-7:00pm. The exhibition dates are November 11 – December 3, 2016. With the artists having roots in both Basalt and Carbondale, Conflux juxtaposes the urban landscape with the rural landscape in an energetic blend. A little bit rebellious, the work combines numerous medias from painting, wheat pasting, digital, photography, spray paint, stencils, screen prints, oil, acrylic and anything in between.

Capturing architecture and the built environment in a state of flux, and with emphasis on geometry, pattern, and gesture, Framework hovers in a zone between representation and abstraction.

This exhibition is generously sponsored by Poss Architecture + Planning and Interior Design.

The Charles J. Wyly Gallery at the Art Base is pleased to feature painter, calligrapher, writer, and beloved Art Base art educator Laurie Doctor in an upcoming exhibition, Map of Regrets.

Suppose you could map regrets, as if they are places. Are they changed by time and perspective? Do they become something else when visited? Map of Regrets will display visual responses to these questions.

The Art Base Annex is pleased to present Carbondale artist and art educator Lisa Singer in an upcoming exhibition, Storm.  Opening reception is Friday, September 9 from 5:00-7:00 pm.

Storm: New Works by Lisa Singer, introduces paintings and sculptures that hold together the dichotomy of the turbulent and sinister nature of storms and the calm, unwavering center within. The works are about having serenity within the tumult of the world around us.

12th Annual Benefit Celebration: The Off Base Ball + 10×10 Silent Auction, The Charles J. Wyly Gallery at the Art Base

This year’s silent auction has a surprise twist—the donated artworks are unsigned on the front. The theme, Name Unseen, conceals the artist’s identity until after the auction. With the artists’ names concealed, will you still immediately identify the panel created by your favorite artist? Or will you fall in love with work created by an artist you are unfamiliar with? The auction includes 100 10×10 original artworks donated by artists based in the Roaring Fork Valley for an opening bid of $100.

The Art Base Annex is pleased to present nationally exhibited and collected artist Teresa Booth Brown in an upcoming exhibition, Anomalies.  Opening reception is Friday, August 12 from 5:00-7:00 pm.

Anomalies will feature a mix of small diptychs and a wall of framed collage. Starting with a simple composition, each piece is developed intuitively by the addition and subtraction of layers of paint, collage, and/or drawing.

The Charles J. Wyly Gallery at The Art Base is proud to feature Aspen/Snowmass photographer Jeremy Swanson in an upcoming exhibition Mountain Portraits. Opening reception is Friday, August 12, from 5:00-7:00 pm.

A photographic portrait of a person is crafted with the intent to go beyond simply depicting what the subject looks like—to reveal who the subject is. Mountain Portraits applies the same revelatory process to the iconic peaks of the Roaring Fork Valley—to capture images that bring to light something of their true nature.

*Jeremy will donate 10% of all sales from the exhibition to Aspen Center for Environmental Studies. “Much of the wilderness surrounding the Roaring Fork Valley is threatened by being ‘loved to death’—where natural areas are degraded by overuse. The educational programming provided by ACES helps protect these vulnerable places,” Jeremy.

The Art Base Annex is pleased to present The Looking Glass: Artist Proofs by Lynn Goldsmith.  Opening reception is Friday, July 8 from 5:00-7:00 pm.

The Looking Glass is an intimate study of personal identity. Portrait photographer Lynn Goldsmith turns her lens on herself, and assumes an array of elaborate guises and imaginative scenarios, highlighting the psychological relationship between what we see and what we imagine.  Step into The Looking Glass with Goldsmith to witness her journey of self-examination, and discover what continues to make us human in this culture of the image we inhabit.

The Charles J. Wyly Gallery at The Art Base is proud to feature nationally exhibited artist Andrew Roberts-Gray in an upcoming exhibition Crazy Mix and the Love Child. Opening reception is Friday, July 8, from 5:00-7:00 pm.

This exhibition explores the contrast in styles within the same medium—how a seemingly insignificant instrument can release a small amount of material onto a surface— leaving a visible and profound mark in time and humanity.

Each mentee exhibit is up for approximately nine days.

This exhibition is offered through The Claudette Carter ARTmentors Program—founded and directed by working artist, Nancy Lovendahl, and is for high school juniors who are considering a career in the arts. This year Nancy and artists, Ingrid Magidson and Kathy Honea, each worked one-on-one for nine months with their respective Basalt High School or Roaring Fork High School junior. Mentees learn firsthand what it takes to become a working artist, and are introduced to the full cycle of the artistic process—concept, creation, promotion—culminating in their one-woman exhibition in The Charles J. Wyly Gallery. This mentorship is invaluable in applying for admission and scholarships to colleges.

The Art Base Annex will feature internationally exhibited and collected artist Wewer Keohane in an upcoming exhibition, Evolution of a Dream.  Opening reception is Friday, May 13, from 5:00-7:00 pm.

Evolution of a Dream demonstrates how a dream created from collected ephemera can inspire an evolving series that moves from the dream’s symbolism to minimalism to abstraction. Wewer’s love of paper translates into a unique body of work with graphic boldness and deep meaning.

The Charles J. Wyly Gallery at The Art Base will feature nationally exhibited artist and art educator Jennifer Ghormley, in an upcoming exhibition Flow. Opening reception is Friday, April 8, from 5:00-7:00 pm. Flow is a site-specific installation comprised of more than 300 handmade geometric shapes.  The individual pieces are created by printing a woodblock onto pieces of translucent paper, then cut into shapes and sewn together on the machine. The pieces gently move with air currents to create a sensory experience and physical connection between the viewer and the artwork.

The Art Base Annex will feature Roaring Fork Valley resident and artist Glenn Smith in an upcoming exhibition, Mechanical Love Stories.  Opening reception is Friday, April 8, from 5:00-7:00 pm. Mechanical Love Stories is a collection of sculptures and photographs utilizing “tools of the trade,” beckoning the viewer to “come closer and investigate.” Glenn’s work tells the unspoken stories of machines and hand tools by highlighting the hidden details that we all take for granted.

The Art Base Annex is pleased to announce an upcoming exhibition in collaboration with Anderson Ranch Arts Center’s 50th Anniversary, Supporting Artistic Excellence: The Dee and Charles J. Wyly Collection. Opening reception is Friday, March 11, from 5-7 pm, with a champagne toast honoring Dee Wyly at 6pm. The exhibition dates are March 11–April 2, 2016. As champions of the arts and arts education, Dee and Charles Wyly have played a crucial role in fostering a dynamic visual arts community in the Roaring Fork Valley. Their collection reflects a deep commitment to supporting artistic excellence. This is a rare opportunity for the public to view their collection, featuring works spanning five decades in connection with the Ranch’s 50th Anniversary. The exhibition will showcase the works of artists affiliated with Anderson Ranch Arts Center and our valley.

The Charles J. Wyly Gallery at the Art Base will feature local Carbondale artist Philip Hone Williams March 11 through April 2. An opening reception will be held Friday, March 11 from 5 to 7 p.m. Recent Works by Philip Hone Williams will present oil paintings featuring intriguing rocks blended or embedded with man-made artifacts. Philip’s career path has taken him around the world and back to his original passion—painting.  http://honepie.com/